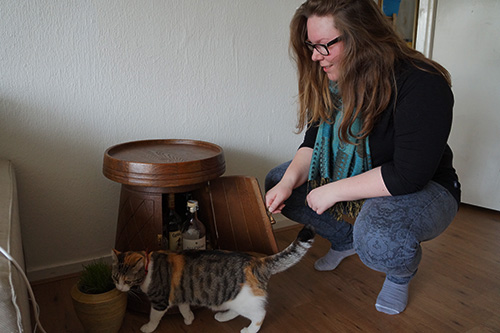 Hoe ben je in Utrecht terecht gekomen? ‘My mother is Finnish and my father is Spanish and I grew up in Frankfurt, Germany. I moved to Utrecht to study ICM. I wanted to leave home but at the same time I didn’t want to go too far.’
Omschrijf je stijl? ‘My style depends on my mood. There are days I wear ripped jeans and ripped t-shirts and there are days when I feel more like dressing up. I'm wearing my favorite pair of jeans right now. They are by Cheap Monday jeans and I liked them right away. They are really comfortable.’
Wat vind je echt überlelijk? ‘I really hate Uggs. I don't see why anyone should wear them.’
Wat is 'most played' op je mp3-speler? ‘I really love Foals and Crystal Castles right now. My taste in music also depends on my mood. Sometimes I listen to hardcore and techno.’
Laatste concert/feest? ‘The last party I went to was the Vice Jägerland party. The last festival I went to was Melt in Germany. I like parties where you can wear whatever you like and I loved Melt because it combines different styles of music I listen to, like electro and indie.’
Film? Garden State and when I get homesick I watch Where The Wild Things Are.
Boek? ‘Mostly I read German books because it's my first language. I also read a lot of magazines. I like Vice and Dazed and Confused the most. Those magazines combine music, art, fashion and photography. All the things I love.’
Meer cultureels? ‘I like FOAM, the photography museum in Amsterdam.’
Hyves of Facebook? ‘Facebook.'
Internet of tv? ‘Definitely internet. I have a bit of a Tumblr addiction.’
Nummer 1 bookmark? ‘I think Tumblr and then Facebook.’
Krant? ‘Sometimes I read German newspapers.’
Wat wil je later worden? ‘There are three plans. I want to do something in marketing and if that doesn't work out I want to be an editor for pictures in magazines. If that doesn't work out either I'm opening a candy store.’